A quail fight in the middle of a dirt road

Like two wrestlers, these two female quails were locked in combat in the middle of a dirt road when I chanced upon them at the grasslands of San Manuel, Pangasinan.

Light was coming from up front (note the shadow of the bird at left), rendering the subjects severely backlit. Nevertheless, I immediately squatted to lower the shooting angle, and took some insurance shots. I was planning to backtrack and circle around the combatants from a good distance until the sun is behind me. Unfortunately, a motorcycle rider came along the dirt road and the fighters got spooked. I had to make do with the insurance shots I managed to capture earlier.

I did some major exposure surgery during RAW conversion and post processing to mitigate the backlighting. Too bad that such action weren't captured under better light!

Habitat - Drier grassland and scrub, often seen along highways or on dirt roads.

And here's the original exposure as captured, before exposure recovery in post process - uncropped full frame resized to 800 x 533. 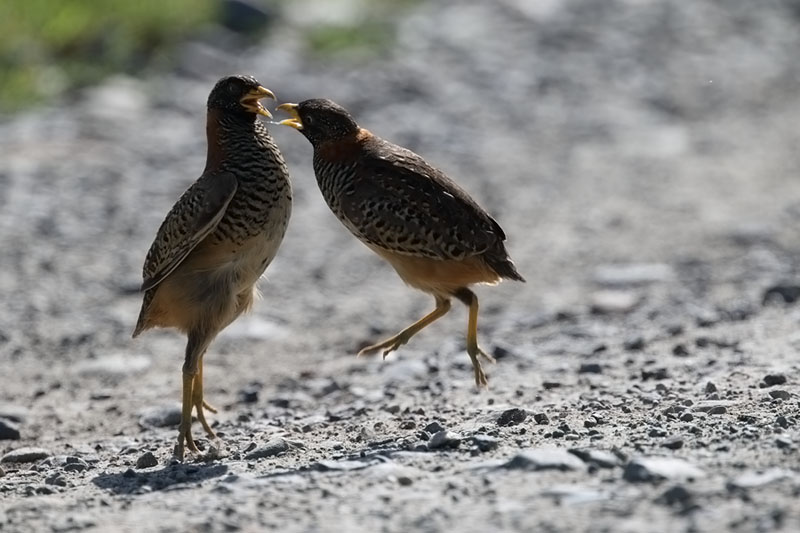 One of the combatants is body slammed onto the jagged rocks of the dirt road.

When the fighters got tired, they took a breather, staying relatively inactive while locking beaks. Both appeared to be unhurt in the melee - each one flew in a different direction when the motorcycle rider  came barrelling by their combat arena.